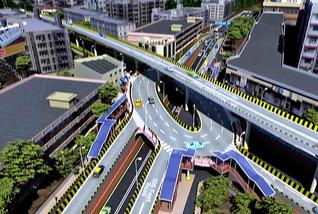 The project cost is Rs 162 Corore, it has two segments, the schedule for completion is 33 months.

The two-tier flyover coming up in Gandhipuram is expected to be ready for use by 2017, according to an official of the State Highways Department.
It includes a four-lane flyover for 1.75 km from Nanjappa Road (near Park Gate junction) that will end near the omni bus stand (Sathyamangalam Road).
It will also have seven-metre wide service lane on either side on Nanjappa Road and two subways (pedestrian crossing) - one at Gandhipuram junction and another near the mofussil bus stand.

The second-level flyover will start near the seventh cross on 100-feet road.