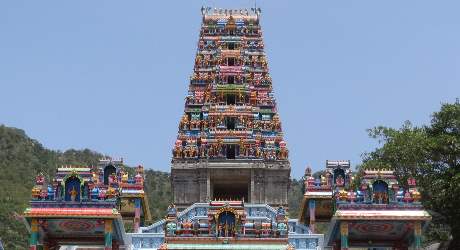 Lord Muruga is glorified as the God of mountain and mountainous regions in THIRU MUGURUGATRUPADI, a noted work of the Tamil Literature of the Sangam Age.The word Muruga is a comprehensive term, connoting several meanings such as sweetness, youthfulness, beauty, divinity and honey and therefore it is but natural for the Lord to have His abode amidst scenic beauty among hills and mountains. Situated at a height of about 500 feet in a plateau on the western Ghats, fifteen kilometres north west of Coimbatore, amidst lush vegetation and salubrious climate, Marudhamalai Hills, dedicated to Lord Muruga (Dhandayudhapani) is classified under KUNRUTHORADAL, one of the six main abodes of the God, the others being THIRUVAVINANKUDI (PALANI), THIRUPARANGUNRAM, (NEAR MADURAI), THIRUCHEERALAVAI (Thiruchendur), THIRUVERAGAM (Swamimalai) and PAZHAMUDHIRSOLAI (Azhagarkoil near Madurai). Set against the backdrop of hazy blue hills dotted with shrubs and bushes of varied hues, the sacred shrine verily reflects the picture of Lord Muruga, magnificently mounted on his vehicle peacock, flaunting and swaying its feathers and plume in full bloom.

The hoary past of the temple can be traced in such ancient works as Sage Kachyapar's PERUR PURANAM. The origin of the temple is rooted in legendary antiquity and dates back to the age of Surapadama, the demon destroyed by Lord Subramanya referred to in SKANDAPURNAM. The inscriptions found in Thirumuruganathaswami Temple, Thirumurganpoondi places the origin of the temple in the 12th century A.D.According to Perurpuranam, Soorapadama, the scourge of the gods aided by his mighty brothers, Singamukha and Tharaka arrayed against them and struck terror in their already agitated minds by his sudden and surprising charges and depredations. Unable to bear the agony and anguish, the gods approached Lord Siva and sought His succour. Lord Siva comforted the Gods that Lord Muruga would come to their rescue, root out and destroy Surapadama and his retinue enmasse. The gods should hasten to the Marudhamalai Hills and await the advent of Lord Muruga, their Saviour! Perupuranam also alludes to a king called Kusathvajan, who, it is said, was blessed with a male issue, only after worshipping Marudhamalai Muruga.The Divine Cow Kamadhenu is reported to have grazed in the pastures of the hills of Marudhamalai.Perurpuranam lists the three neighbouring hills, vellingiri, Nili and Marudhamalai as the very manifestations of Lord Siva, Parvathi and Subramanya respectively and the three hills taken together as the very symbol of Somaskanda.

For the benefit of devoties the Temple runs three Mini Buses from foot hills to Hill Top. Devoties can walk through the Steps where Electrical Lamps are fixed on the two sides for the benifit of Devoties.

Golden Chariot is at the hill top with an height of 16.5 feet that has been made with Gold at an cost of Rs. 1.08 Crores in the year 2003. Devoties can pay a sum of Rs. 1,500 for this golden chariot for which 3 persons are allowed.